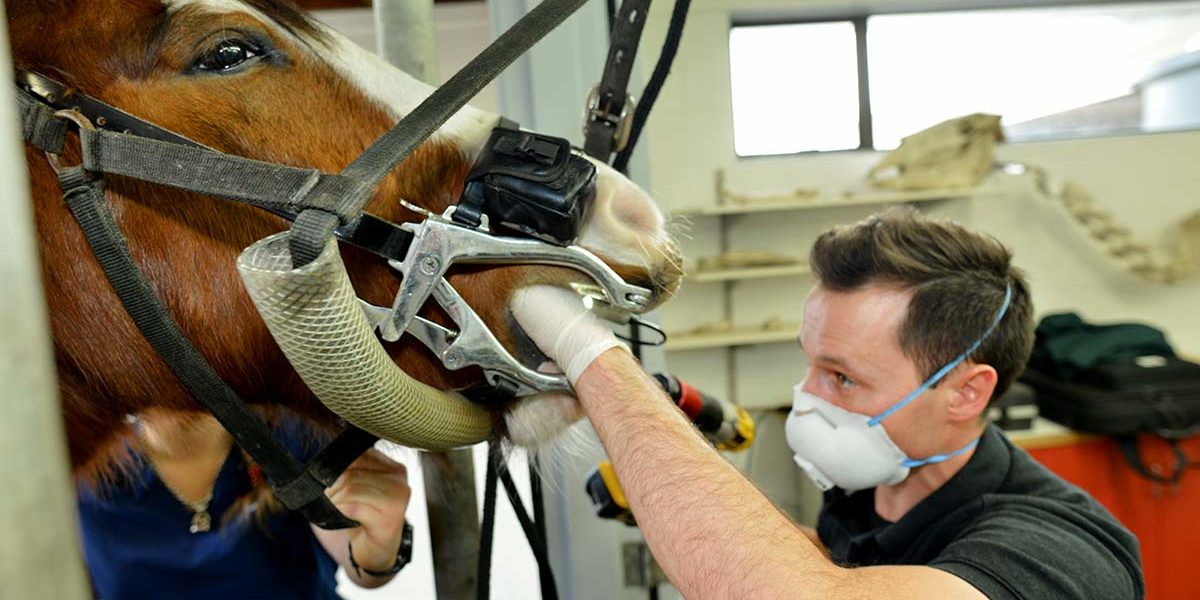 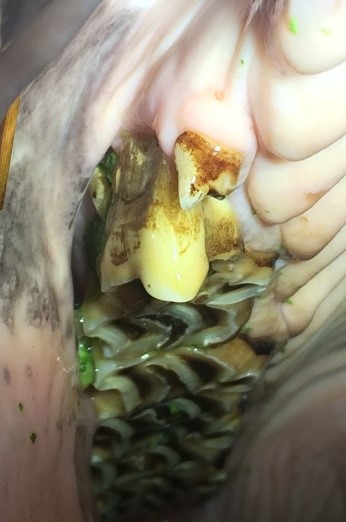 Wolf teeth are technically known as the first premolar teeth in horses.  They usually erupt into the mouth at between five and twelve months of age, but do not continue to grow or erupt into the mouth as do the rest of the cheek teeth.  It has been estimated that approximately seventy percent of horses will develop wolf teeth.

Development of wolf teeth is not sex related, so fillies are equally likely to develop them.  They are positioned just in front of the first cheek teeth.  Wolf teeth are more commonly found in the upper jaw but may appear in the lower jaw in some horses. Sometimes there may be a wolf tooth only on one side and not on the other.

The majority of wolf teeth do emerge through the gums, but some may remain hidden – so called “ blind” wolf teeth. These are often situated two to three centimetres in front of the first cheek tooth, much closer to where the bit is usually positioned.

Wolf teeth are vestigial teeth that probably date back to when horses were much smaller, forest-dwelling browsers.  Fossil records indicate that over thousands of years, as horses evolved into grazers, they have gone from having seven functional cheek teeth in each arcade to only six.  The first premolar has thus become redundant and does not have a chewing function at all.

In horses that are to be ridden or driven in a bit of any sort, extraction of wolf teeth is the norm.  The main reason for removing them is to allow access to the first cheek teeth (second premolars) so that these can be contoured or “ bit seated”.  This a misnomer as the bit doesn’t usually sit back against the cheek teeth, but it does push the cheeks back against them.  If the front edges of these teeth are sharp, then pain avoidance behaviours such as head tossing, rearing, pulling hard, bolting, getting the tongue over the bit, head tilt or not taking one lead may result.  Furthermore, particularly in the case of blind wolf teeth, horses may be uncomfortable with the bit contacting the overlying gum tissue.  It is often quite dramatic to see the change in behaviour on the bit after these worrisome teeth are removed.

The younger the horse the easier it is to extract wolf teeth.  In male horses we often remove them at the time of gelding, a relatively simple procedure.  There are many ways to extract wolf teeth, some of which, in my opinion are outdated and should not be practiced.  Until the operator who “smacks” out wolf teeth with a hammer and chisel/screwdriver will allow one of their teeth to be removed in the same fashion, and then reassure me that it doesn’t result in a sudden onset of pain and long memories of fear of work in their mouth, I will continue to use sedation and local anaesthesia.  By simply knocking the tooth out, much of the root is left behind, often protruding from the gum, potentially leading to infection and even abscessation of the tooth.  Many years ago, as with tying colts down for castration, knocking out wolf teeth was considered acceptable.  As we learn how horses vividly remember painful events for a long time and base their trust values on memories such as these, the importance of performing painful procedures with sedation and anaesthesia to minimise these associations becomes clear.

The correct method of wolf tooth extraction is, once the animal is suitably sedated and local anaesthetic applied, to use a clean sharp elevator to cut the gum and stretch the periodontal ligament supporting the tooth in its socket.  As wolf teeth come in a wide range of shapes and sizes, this procedure may take only a few minutes or in some cases much longer.  Patience is the key and one must be gentle to ensure proper loosening of the tooth.  Once loose, forceps are used to remove the tooth.  Obviously the mouth needs to be cleaned out and flushed to make the surgery as clean a procedure as possible.  The aim is always to remove the entire tooth, however in some cases, especially where the end of the tooth root is bent or in older animals, the tooth may break.  As long as the remaining fragment is small and deeply seated beneath the gum, this should not cause a problem, but if the tooth can still be felt, the rest of the root must be extracted.

Tetanus prophylaxis is critical in any horse which has a tooth extracted.  Vaccination against this invariably fatal disease of horses is cheap and very effective.  Once their initial course is completed – two shots a month apart and an annual booster – horses only require vaccination every five years.  In animals that have had no previous tetanus protection, we tend to always cover these with a tetanus antitoxin injection at the time of tooth extraction.