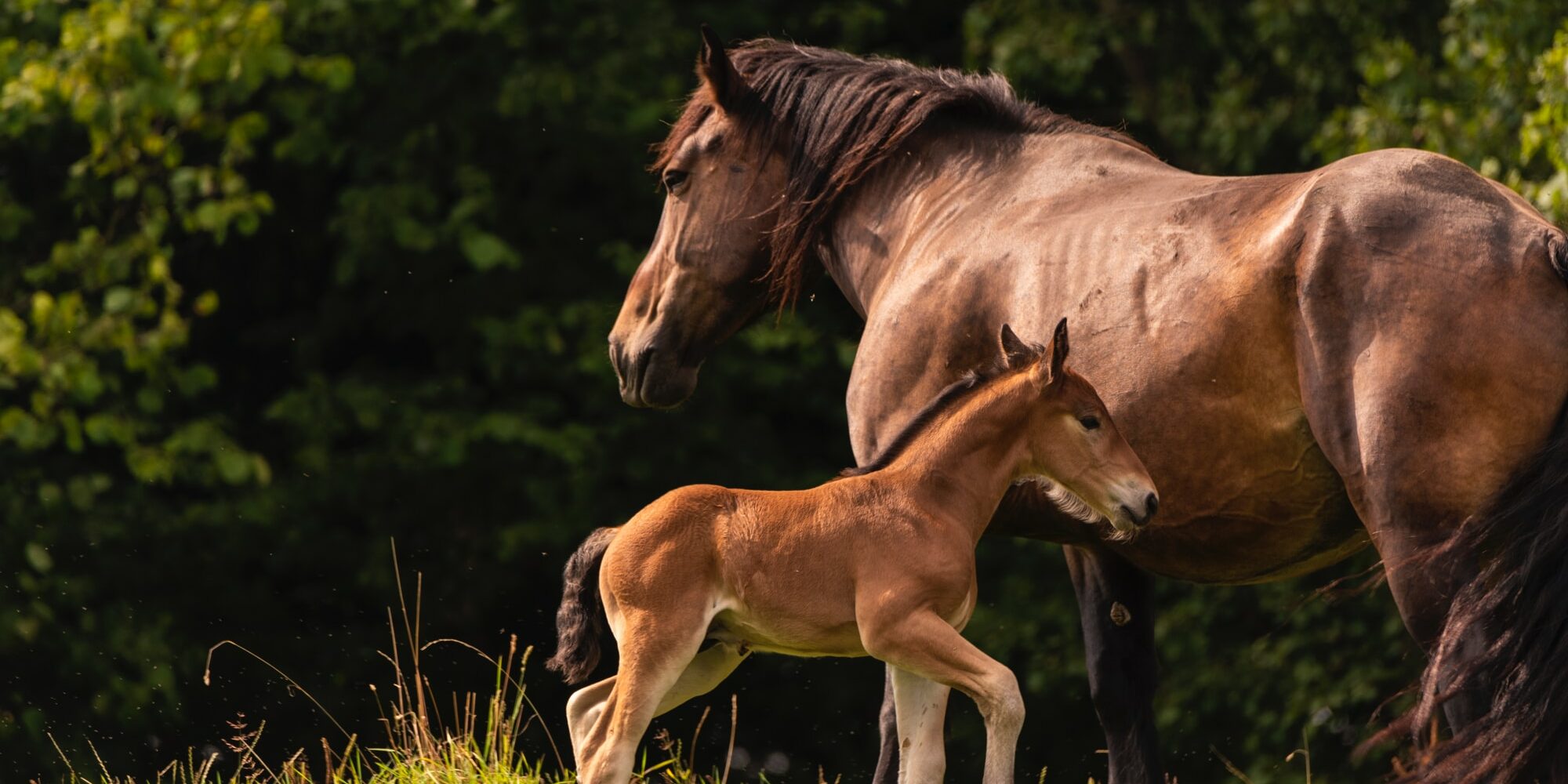 Most pregnant mares should be in or approaching their last trimester. Although the vast majority of mares have uneventful pregnancies, abortion during the last few months can occur.  Besides twin pregnancies the major cause of abortion is Equine Herpes Virus I. This is one of the common Herpes viruses responsible for the ubiquitous common cold and cough we see from time to time, especially in young horses.  Vaccination is effective at protecting the foetus in pregnant mares and should be given at 3, 5 and 7 months during the mare’s first pregnancy and then annually at mid pregnancy thereafter.  Mares should ideally also receive a tetanus booster and a broad spectrum anthelminthic four to six weeks prior to foaling.

Impending birth is often difficult to predict, as most horse breeders will attest to!  Most mares will show waxing – an accumulation of colostrum at the teat ends a few days before foaling but this highly variable.

A foaling alarm is invaluable, but even with this technology, mares still catch us out!  Over eighty percent of mares will foal between two and four in the morning but if disturbed a mare will delay contractions and progress of parturition hence the saying: “The foal determines the day, the mare the hour”.

Foaling is divided into three stages:

First stage labour lasts from a few minutes to three hours and is characterised by restlessness in the mare.  She may get up and down; paw the ground and sweat – mild colic signs.  During this period the foal repositions itself from lying on its back to a normal foaling position and uterine contractions begin.  Cervical dilation progresses and the stage ends when the placental membranes rupture (waters break).

Second stage labour involves the actual expulsion of the foal.  Typically mares lie down and exhibit strong abdominal contractions.   The amnion (white membrane) appears at the vulva followed shortly after by the two front feet – one slightly in front of the other with the head nestled between the knees. From this point the foal should slide out within a few minutes and the entire stage should not last longer than about twenty minutes.

Third stage labour is the expulsion of the foetal membranes and typically occurs within three hours.

The vast majority of mares will foal without complication and in most cases minimal interference and disturbance of the mare is the best policy.

Occasionally things do not go according to plan and in these cases please call us immediately:

If you suspect a problem with the mare’s foaling do not hesitate to call, regardless of the hour!  Every minute is vital.  While waiting for us to arrive please try to keep the mare up and walking as this will prevent her contractions.  Get some gear ready including a couple of buckets of clean warm water, torches, a tail bandage and lube (if you have it).  If possible move the mare to a clean area of paddock or if she is used to being inside put her in a clean stable or loose box.

If the foal’s head is presented and progress is halted, gently clear the membranes away from the nose and mouth.  Take special care with personal safety when working with foaling mares.  Even the most placid mare can react aggressively when in pain or protecting a new born foal.

Once the foal is delivered most mares will remain lying down for some time. This is normal and it is thought that a significant quantity of blood enters the foal through the umbilical cord.  The cord will rupture at its weakest point when the mare gets up. Do not cut or tear the cord.  It is good practice to disinfect the umbilical stump with dilute chlorhexidine solution.

New born foals should have a regular heartbeat and breathing within a minute of delivery.  They usually attempt to right themselves and have a suck reflex present within five minutes.  Most foals will try to stand up within half an hour and can stand unassisted by two hours.  They should be feeding within three hours.

Administration of tetanus antitoxin by subcutaneous injection is recommended in new born foals.

If you are at any time concerned about you pregnant mare, foaling or new born foal, please do not hesitate to give us a call.